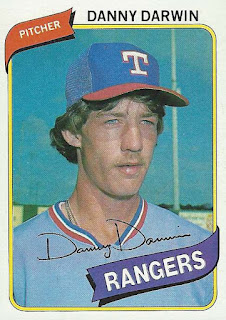 In 1979, Danny Darwin broke into the Majors for good. In 1980 he would come to the rescue of the Texas bullpen. Darwin, shown here on card 498 of the 1980 Topps set, had potential and the Rangers would see some of it realized.

Mostly a reliever, Darwin made just two starts, both in place of the ailing Steve Comer. He would appear in a total of 53 games over the course of the season, the most of any pitcher on the staff. His 109.2 innings pitched led the bullpen and his 2.63 ERA and 1.350 WHIP were second in the pen only to John Henry Johnson. Danny also led all Rangers relievers with 104 strikeouts. Compared to the 50 walks he issued, his strikeout to walk ratios was a nice 2.08. He also finished up a bullpen best 35 games for Texas during the season. To show how key Darwin was to keeping the Rangers in games, he ended the season with a 13-4 record, that in spite of only having six blown saves.

What's even more amazing about the numbers Darwin put up was that he spent almost a month on the Disabled List. Danny ended up on the DL on June 4th after fracturing a knuckle in the little finger of his right hand while aiding Mickey Rivers in a scuffle with fans outside Comiskey Park. He came back to action on June 26th and immediately displaced Sparky Lyle as the team closer. In that role he would notch eight saves in the remaining portion of the season, tying with Lyle for the most on the team.

All in all, the Rangers couldn't have asked for much more from Danny Darwin in 1980. As the long reliever in the pen, he made a major contribution to keeping the relief corps afloat as Lyle, Jim Kern, and Dave Rajsich went through very rough seasons of their own. As the closer he stepped up and replaced one of the league's best. His season was good enough to later make T.R. Sullivan's list of the Fifty Best Seasons in Rangers History and it gave Texas much to look forward to in the future from their young hurler.
Posted by Spiff at 10:18 AM