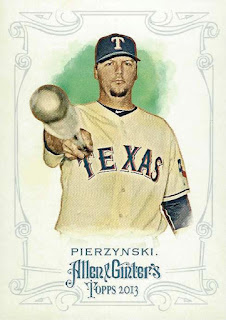 Well, it had been awhile since I received any random packages but that has been recently ended with the arrival of three awesome packages from three great guys. Time to give credit where credit is due.

Several weeks ago BwvJones over at Golden Rainbow Cards sent me an email. He let me know he had some 2015 Topps Rangers that would fill holes in my team set. Just send him my address and he would drop the cards in the mail. Well, Jones was as good as his word. All six cards he sent me hit holes. I would have posted one of them but, since I am walking through the Topps team sets on Tuesdays, you'll just have to wait a few years for them. Thanks a bunch Jones, I'll try to get a few spare moments and see if I can hit any of your wantlist.

Meanwhile, Mark the Royals fan sent me a message telling me he picked up an item he thought I would like. He didn't tell me he was sending it and it unexpectedly arrived in my mailbox. Not much really, just a Yu Darvish bobblehead. The blue version of the K counter. WOW! It looks great next to the red version I already had. Gotta love those kind of surprises. Thanks Mark, I'll see what I can dig up by way of Royals to send your way.

Yesterday a nice bubble mailer arrived from the famous Night Owl of Night Owl Cards. It was packed with a nice assortment of Rangers cards and a 1984 Fun Foods pin of Frank Tanana. Most of the cards hit holes in my wantlist, including the 2013 Allen and Ginter A.J. Pierzynski shown at the top of this post. Also included were two copies of 2006 Topps card 312. One shows pitcher John Koronka in a Rangers uniform. The second, included for "full effect" shows him in a Cubs uniform. Nice touch. Owl mentioned his supply of Rangers is running low. No worries, the bottom of the stack was great and I only have a few more Dodgers left anyway. Thanks Mr. Owl!
Posted by Spiff at 11:37 AM

You're welcome. I plan to spend 2016 building up Rangers cards.