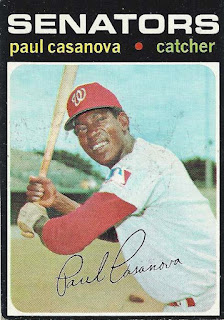 Paul Casanova, shown here on card 139 of the 1971 Topps set, had been serving as the Senators starting catcher since 1966. That year he had been voted the top catcher in the American League by the Baseball Writers Association. In 1967 he was named Washington's team MVP and made a trip to the All-Star game. 1970 had been a solid season as well.

Not known for his bat, Casanova hit just .203 over 94 games and 329 plate appearances for the Senators in 1971. His 14 walks helped push his on-base percentage up to .238. Of course, he also struck out 52 times. There had always been a hole a Paul's swing though and he generally tended to strike out much more than he walked. With that ratio, one would expect some real power. It was not so, just nine doubles, one triple, and five home runs on the year. Generally near the bottom of the order, Casanova scored just 19 runs all season and was responsible for only 28 RBI.

After several years of having no real challengers for his position, Paul lost playing time in 1971 to rookie Dick Billings. Appearing behind the plate in just 83 games, he logged 716.2 innings on defense. His seven errors helped drop his fielding percentage to .985, three points below the league average. After an outstanding season of catching would-be base thieves in 1970, Casanova allowed 32 stolen bases in 1971 while catching just 17 opposing runners. Those numbers dropped his caught stealing percentage to 35%. That was four points below the league average. He also allowed six passed balls.

1971 was a challenging season for Paul Casanova. Dick Billings was trying to take the starting catcher gig away from him and posted a better batting average (43 points higher), on-base percentage (58 points higher), and fielding percentage (seven points higher). Billings struck out at about the same clip as Casanova but had a bit more power and did walk a little more. Paul allowed far fewer passed balls than Billings but his caught stealing percentage was only two points higher, almost a dead heat. Those comparisons did not bode well for Casanova.

Apparently the Senators decided to go with a new face behind the plate as the club moved to their new home in Texas. On December 2, 1971 they traded Paul Casanova to the Atlanta Braves for fellow backstop Hal King. Paul would go on to catch for the Braves for three more seasons, mostly as a backup or platoon player, before being released prior to the 1975 campaign.
Posted by Spiff at 10:58 AM