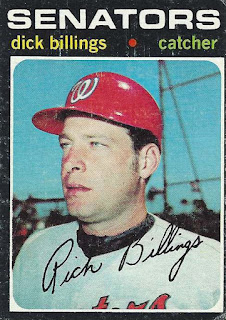 In spite of stints with the Senators in 1968, 1969, and 1970, Dick Billings retained his rookie status until 1971. 1971 Topps card 729 was Billings' first card. Interestingly, he signed his first name Rich in the facsimile autograph.

Part of the reason Dick spent most of the previous three seasons in the minors was that he was blocked behind the plate by Paul Casanova. That was still a problem for Billings in 1971 but he did pick up a bit more playing time with the release of John Roseboro in August of 1970, the decline of playing time for Jim French, and the Senators willingness to use him more as a utility player. The result was Rich's first full season in the Majors.

Serving as Casanova's primary backup, Billings played in 62 games behind the plate. Over 548 innings he committed three errors for a .992 fielding percentage. That was well above the league average .988. He caught 21 would-be base stealers but 44 others successfully swiped on him for a 32% caught stealing. That lagged behind the league average 39%. Also of note, in his limited playing time, Dick managed to lead the American League in passed balls with 16. Some of that may have been due to his above average fielding abilities, a wild pitch might become a passed ball with him.

Billings also played 222.1 innings over 32 games in the outfield, about two thirds of that time was in left field with the remainder being in right. He muffed just one play out there for a .977 fielding percentage. That was significantly lower that the league average .982, as was his range when compared the average American League outfielder. 4.2 innings at third base in two games with no errors completed his defensive appearances for the season.

Rich made 380 trips to the plate on offense in 1971 and posted a .246 batting average. He struck out 54 times but his 21 walks helped push his on-base percentage up to .296. There wasn't a lot of power in Billings bat yet, 14 doubles and six home runs during the season. Mostly near the bottom of the order, he scored 32 runs and knocked in 48 RBI.

Dick Billings had not blown the doors off in 1971, but he did what he needed to do. With his extra playing time he caught attention in the Washington front office. Billings' batting average, on-base percentage, and fielding percentage behind the plate were all higher than Paul Casanova's. In addition, Casanova's arm seemed to have fallen off and his caught stealing percentage was only three points higher than Rich's. With the two being just a year apart in age, Dick Billings had made a case for the Senators to consider him, rather than Paul Casanova, as their catcher of the future.
Posted by Spiff at 10:28 AM