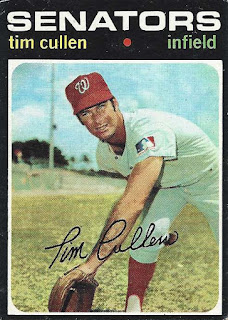 Hope everyone had a great Christmas with family and loved ones. Here in the dead of winter, I must say I had a great time but I'm missing baseball. Time to get back to the Senators.

Tim Cullen, shown here on card 566 of the 1971 Topps set, had been with the Senators since he broke into the Majors in 1966. By the next year he was as close as anyone to the regular second baseman for Washington. Tim stayed there, with the exception of a side trip to the White Sox and back in 1968, for the rest of his time with the Senators. Cullen was known more for his defense than his skills with the lumber. 1970 had been no exception. Things were changing though and Tim needed to get his bat in order if he wanted to hang on to his starting job in 1971.

Cullen made 443 trips to the plate in 125 games for Washington in 1971. He struck out 47 times and walked just 33 times en route to a dismal .191 batting average and .252 on-base percentage. That batting average was the lowest among Washington regulars. Tim didn't have a lot of power to bolster his offense either, he hit 13 doubles, four triples, and just two home runs all season.

Feeling pressure from Bernie Allen and a young Lenny Randle, Cullen spent just 592.2 innings at second base, spread over 78 games. He committed only one error at second for a .997 fielding percentage. That was well above the league average .980. For another 442.1 innings in 62 games, Tim was stationed at shortstop. It was not his natural position and he stumbled 10 times for a .963 fielding percentage, two points lower than the league average.

1971 was not kind to Tim Cullen. His bat practically evaporated on him just as Randle mounted a serious challenge for second base. The timing was not good. Cullen made to move to Texas with the team but would not be with the team in 1972. Displaced at second by the platoon combination of Randle and Vic Harris, Tim became the odd man out. Texas released him on March 7, 1972, before the regular season even began. On April 15, 1972 the Oakland A's signed him. Cullen played out the year as a backup for Oakland before calling it a career.
Posted by Spiff at 10:30 AM