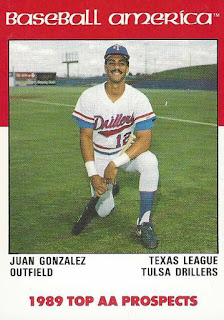 Today's card is one of those odd-ball cards that find their way into every collection, card AA-26 of a set issued in 1989 (I think) by Baseball America. I think this is the only minor league card I have of Ranger great Juan Gonzalez.

Gonzalez didn't spend much time in the minors after signing with the Rangers at age 16 in 1986. By 1989 he had worked his way up to Double A and was considered one of the top prospects in baseball.

Starting the 1989 season off with the Double A Tulsa Drillers, Juan would appear in 133 games, all in the outfield. His nine errors would drop his fielding percentage to .972. That's a little lower than most teams want to see from a top prospect but Gonzalez's bat more than made up the difference.

In 547 plate appearances, Juan posted a .293 batting average and a .342 on-base percentage. He walked 31 times but also showed a tendency to strike out as he did so 98 times during the season. With those strikeout numbers some power was to be expected and Gonzalez delivered: 30 doubles, seven triples, and 21 home runs. He scored 73 runs showed his fondness for the RBI by tallying 85 of them.

Texas was impressed with what that had in Juan Gonzalez and called him up to the Big Show when the rosters expanded in September. He made his Major League debut on September 1, 1989 and appeared in 24 games for Texas before the end of the season. Most of the time the Rangers used Gonzalez in center field, all but two of the 169 innings he played were there. He committed two errors to give him a .964 fielding percentage. That was well below the league average .980 but Juan also had significantly more range than the average American League center fielder.

At the plate, Gonzalez found out that Major League pitching was a bit different than Double A stuff. He posted a .150 batting average and a .227 on-base percentage. Again, his strikeouts way outnumbered his walks - 17 to six. There was some power though, three doubles and one home run.

Juan struggled a bit after being called up to the Majors but he got his feet wet and Texas still liked him a lot. The potential was there and, once the adjustment was made to the higher level of play, the Rangers fully expected Gonzalez to deliver in a big way. They assigned him Triple A Oklahoma City to begin the 1990 season with the expectation that he would not stay there long.
Posted by Spiff at 10:39 AM