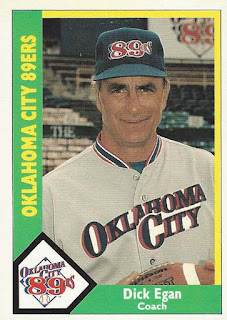 Today we come to the end of my current collection of 1990 CMC Oklahoma City 89ers. Going to finish things up with three cards of the coaching staff.

Pitching coach Dick Egan starts things off on card 172. Egan's Major League career spanned four seasons, from 1963-1967 with the Tigers, Angels, and Dodgers. 1967 would be the only season he did not spend time in the minors. His minor league career started in 1957 and ended after the 1969 season. After his retirement as a player, Dick moved into scouting. He spent the 1988 and 1989 seasons as the bullpen coach for the Rangers. Judging by the football Egan is holding, some of Texas' pitching coach Tom House's training techniques rubbed off on him during his time in Arlington. Texas must have liked Dick's work with the young players in their system. He would be named manager of the Rookie League Butte Copper Kings for the 1991 season. 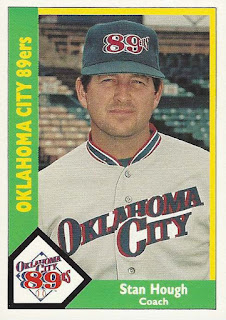 Stan Hough, shown here on card 173, had been a coach in the Rangers farm system for four seasons by the time this card was issued. Prior to that he played pro ball in the Mets and Astros systems from 1974 to 1985. Mostly a catcher, with some first base and outfield thrown in, Hough made it up to Triple A but never got the call to the Big Show. He started his coaching career in 1983 and 1984 as a player-coach for Houston at Single A. In 1987 he made his managerial debut with the GCL Rangers of the Gulf Coast League. That assignment lasted just one season. in 1989 he was named as a coach for Oklahoma City. He continued in that role for the 1990 season. Eventually, Stan left the Rangers organization and managed in the minors for the Yankees and Expos. In 2002 he was a coach for the Clinton Lumber Kings and in 2003 he managed for Baltimore's Single A affiliate. In 2006 Hough returned to Texas, this time as manager of the independent Fort Worth Cats. He managed the Cats in 2006, 2007, and 2011. 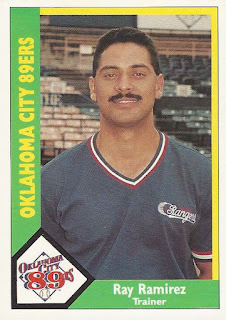 Rounding out today's trio of coaches is OKC trainer Ray Ramirez, seen here on card 174. Ray's first season with the 89ers was in 1987 and he stayed on the job through the 1991 season. In 1992 he moved up to Arlington and served as an assistant trainer with the Rangers. Tracking trainers is a bit difficult, but it looks like Ray landed a job as the head trainer for the New York Mets in 2005.
Posted by Spiff at 10:00 AM