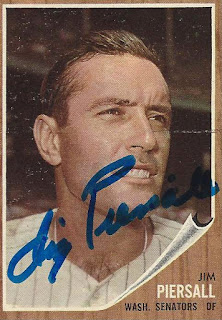 Well, things are starting to get busy here in the lead up to Christmas. I hope everyone is enjoying the season and the looking forward to the prospective time with family and friends.

The through the mail request returns have slowed almost to a stop. I haven't sent any out in several weeks and probably won't until after New Year's. After all, baseball players get busy around the holidays as well and need some time off. The most recent return was this 1962 Topps card of former Washington Senator Jim Piersall. I sent this card to Mr. Piersall on October 30th. He took the time to sign and return it. It arrived in my mailbox on December 10th. Thanks a bunch Mr. Piersall!

In other news, the Rangers and the city of Arlington have apparently agreed to build an entertainment center between Globe Life Park and Jerry World where some football team plays. The project looks to cost around $200 million. It will include a hotel and a convention center along with a few other things. The company doing the building has several other similar projects across the US. They did one in Saint Louis near the ballpark that my Dad has seen and says is a pretty nice place. I'm liking the sound of that. I love the Rangers but the area around their park is pretty bland and bare. It would be nice to see something close to it along the lines of what Boston, the Cardinals, and the Cubs have around their parks. Also, so long as it doesn't break the bank, an investment of this magnitude is likely to keep the Rangers anchored in Arlington for many years into the future. No more talk of Dallas stealing the team away, I hope.
Posted by Spiff at 10:08 AM