Looking for a win. 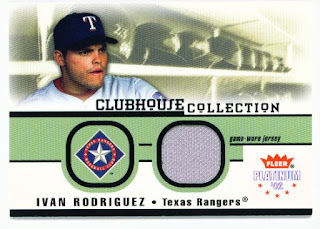 Two losses in a row to the despised Blue Jays. Ouch! Hopefully the boys can get it together and take the series finale tonight. That would at least give them a split with Toronto. A split wouldn't be the best but at least it keeps the Jays from chattering.

With ongoing computer issues and no wins to talk about, I decided to go with a random game-used card for today. Thinking maybe this 2001 Fleer Platinum Clubhouse Collection card of former Ranger great Ivan Rodriguez might bring the team luck. At least it won't hurt. Looking forward to the guys getting the ball rolling again so I will have something more to post on.
Posted by Spiff at 10:51 AM