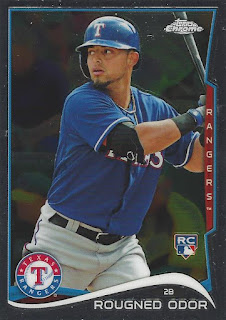 Well, Spiff Jr and Grandpa made it out to Saturday's game. They watched Bobby Wilson hit his second grand slam of the season, Shawn Tolleson blow the save, and Drew Stubbs hit a walk-off homer to end the game with a Rangers victory over the Blue Jays. Oh, and they also picked up the Rougned Odor giveaway bobbleheads. Not a bad night at the ballpark.

Yesterday Odor, shown here on card 213 of the 2014 Topps Chrome set, was again a featured name. This time it wasn't due to a stadium giveaway. The Rangers jumped ahead of the Jays for the final time in the game as Texas scored four runs in the bottom of the seventh to set the score at 7-6. That's what it would be at the end of the game.

In the top of the eighth Jose "Bat Flippin" Bautista came up to bat for the final time against the Rangers during the regular season. To that point there had been no retaliation against Bautista for his theatrics during the playoffs last year. This time Matt Bush hit him.

Little aside here. I don't agree with the man-child Bryce Harper that baseball is old and boring without displays like he enjoys putting on. I also hold no hard feelings against a player who can beat the Rangers, just because they win. What sticks in my craw about Jose Bautista is the little act he put on during the playoffs. The bat flip and stare down were over the top and unnecessary. If, after his MLB service time, he didn't know that he needs to learn. That brings up a second point: if you're going to show people up, don't cry when they settle your hash. Harper routinely whines about retaliation and Bautista did so after the game last night, calling the Rangers cowardly for waiting until his last at bat. Really? The games (except one) between the teams have been close. This game was as well but this was the last chance to send a well-deserved message to Jose. He would have been well-advised to receive the message and move on.

Of course, Bautista is of the breed of prima-donnas who don't receive messages and move on. When Justin Smoak hit into a double play Jose performed a now illegal takeout slide on Rougned Odor. Baurista, being the entitled entity that he is, came up and barked at Odor. Roughie shoved Jose and then punched him right in the face. If you haven't seen it, it is probably the most solid punch I have ever seen a player land on the diamond. Buatista's helmet and sunglasses went flying and he went down before being grabbed by Adrian Beltre. The benches cleared and Odor gave some of the same treatment to Josh Donaldson when he tried to get involved.

I'm sure there's some fines and maybe other punishments coming. The immediate result though was an automatic double-play and the ejections of Odor, Bautista, Donaldson, and Rangers bench coach Steve Buechele. Prince Fielder led off the bottom of the eight and was hit by a pitch from Jesse Chavez. That resulted in Chavez and the Jays bench coach being tossed from the game. Their manager was gone before the Bautista/Odor dust-up. After that things settled down for the remainder of the game.

In a way I enjoy on-field brawls as much as the next guy. In another way I hate to see them. I think they detract from the game, just like bat flipping and show-boating do. However, a team has to stand up for itself or things will just get worse. Bautista needed a lesson and hopefully he got one. He strikes me as a slow learner though and I wouldn't be surprised to see another team follow Rougie's example and let him know he's out of line at some point.
Posted by Spiff at 11:56 AM