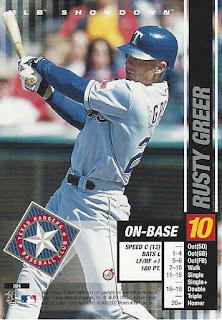 Well, I thought I was back to regular posting. Then when I went to post yesterday I ran into major computer trouble. Things seem to be stable right now but if I disappear again, you'll know why. Anyway, with the Rangers extra-innings loss last night I think the thing to do is the post I had on tap for yesterday.

On the day he was named the American League Rookie of the Month for April, Nomar Mazara stole the show in Toronto. Mazara hammered a home run to center field in the eighth inning to give the Rangers a 2-1 lead. In the bottom of the eighth Mazara caught a fly ball off the bat of Troy Tulowitzki for the second out. Michael Saunders attempted to tag up a score the tying run on the play but Nomar fired a laser to catcher Brett Nicholas (the other home run hitter of the day for Texas) and caught Saunders at the plate to preserve the lead and end the inning. Oh, and there were seven other Rangers playing as well.

I gotta admit, I'm usually pretty slow on the rookie bandwagon. Still not just over the moon about Mazara but he is impressing and I like his style of play. If he can keep it up I think he will be making a big impact for the rest of the season and for several years in the future. Since I have no cards of Mazara I am filling in with another popular Texas outfielder of years gone by, Rusty Greer. The Red Baron appears today on card 64 of the 2002 MLB Showdown Trading Deadline set.

Off the field the Rangers reacquired catcher Bobby Wilson from the Tigers yesterday. Detroit got minor league pitcher Chad Bell. To make room for Wilson the club designated backstop Chris Gimenez for assignment. This afternoon Texas reached a deal with Cleveland that sends Gimenez to the Indians in exchange for cash.