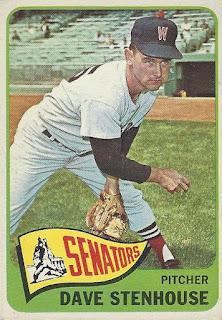 By the time Dave Stenhouse appeared on card 304 of the 1965 Topps set, his Major League career was over. After injuries derailed his 1963 season, his 1964 campaign was not the bounce-back season it needed to be. The front office was not impressed.

The Senators sent Stenhouse to the minors to begin 1965. He spent the season bouncing between the double A York White Roses and the triple A Hawaii Islanders. Dave actually had a decent season with York and turned in a 1.50 ERA in two starts with Hawaii. That didn't earn him a return to the Bigs but did ensure he would start the 1966 season at triple A.

Stenhouse appeared in 36 games for the Islanders in 1966, only seven were starts. Apparently the Senators thought they needed some relief help and decided to try Dave in a reliever role. The role didn't seem to matter as Stenhouse struggled to a 5.28 ERA and 1.635 WHIP over 104 innings pitched. As you might suspect, he did not get the call back to Washington.

1967 was another season in Hawaii for Dave, but he would only appear in eight games for the Islanders. All of Stenhouse's appearances were in relief and he tossed just 16 innings. He ended the season with a 3.94 ERA and a 1.312 WHIP.

I don't know if the Senators released Dave Stenhouse early in the 1967 season, if he decided it was time to go, or if he suffered another injury. Whatever the reason, his abbreviated 1967 season marked the end of Dave Stenhouse's pro career.
Posted by Spiff at 11:19 AM