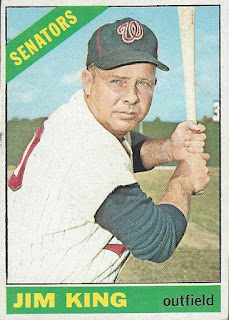 Got a wedding to attend today so your going to get a pre-scheduled Senators Saturday post featuring Jim King on card 369 of the 1966 Topps set.

1966 was King's sixth season with the Senators. Jim needed a better season than he got in 1965 to hold on to his position as the club's starting right fielder.

While still technically the starting right fielder for Washington, King was being challenged for playing time. He played in just 85 games in the field in 1966, all in right field. Over the course of the 670.2 innings he played on defense, Jim committed just two errors. That gave him a .987 fielding percentage, significantly higher than the league average .979. True to form, King's range was higher than average as well.

Jim made 350 trips to the plate over 117 games. He put up a .248 batting average and a .330 on-base percentage. The average was a nice increase over the previous season but the on-base percentage fell seven points. King scored 41 runs and accounted for 30 RBI. He walked 38 times and struck out 41 times. While he did suffer a power decline, there was still some pop in Jim's bat. He knocked 14 doubles, two triples and ten home runs over the course of the season.

1966 had been a mixed bag for Jim King. He maintained his great defense and gained some back with his bat. Of course, he also lost some power on the offensive side of the game and that was troubling. There were still challengers knocking at the right field door and it was looking like Jim's remaining time in Washington might be limited.
Posted by Spiff at 12:18 PM