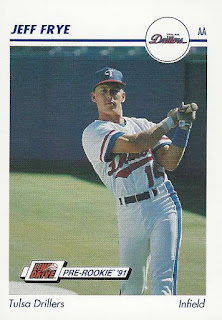 My apologies for the lack of recent posts. Had family in last week and things got away from me. Back in the saddle now though, just in time for the Rangers to lose yesterday. Well, looks like a good time for another installment of Minor League Monday.

Today we have Jeff Frye appearing on card 579 of the 1991 Line Drive set. After being drafted by the Rangers in 1988, Frye worked his way up the minor league ladder fairly quickly. He spent the 1990 season with the Single A Charlotte Rangers before being moved up to Double A for 1991.

Jeff played in 131 games for the Tulsa Drillers in 1991 and made 583 trips to the plate. He adjusted well to the new level of play, posting a .302 batting average and a .388 on-base percentage. Both were actually increases from the previous season. Frye scored 92 runs and knocked in 41 RBI while putting up 32 doubles, 11 triples, and four home runs. He also stole 15 bases while getting caught eight times. Continuing his tradition, he walked more than he struck out - 71 passes compared to 60 whiffs.

Defense had been Jeff's struggle with Charlotte and it continued with Tulsa. In spite of the designation on the front of his card, Frye played only at second base for the Drillers. He committed 26 errors in the 127 games he played there and ended the season with a .957 fielding percentage.

While Jeff Frye still needed a lot of work on his glove, his bat and plate discipline remained constant. The Rangers liked that and figured they could get Jeff's glove to come around in time. He would be assigned to Triple A Oklahoma City for the start of the 1992 season.