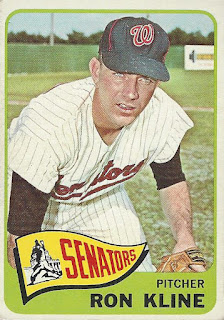 Well, Spiff Jr's Little League season winds on today. Since I have work and a ballgame to attend to, you'll have to settle for a pre-scheduled Senators Saturday.

Today Washington reliever Ron Kline appears on card 56 of the 1965 Topps set. 1965 was Kline's third season with the Senators and he had won himself a spot in the bullpen with his consistent performance in 1964.

Ron appeared in a team-leading 74 games for the Senators in 1965 and pitched a total of 99.1 innings. He struck out 52 opposing batters while walking 32. His ERA and WHIP edged up from the previous season to 2.63 and 1.289 respectively. While those numbers were slightly higher than in 1964, Kline still led the bullpen in ERA. Solidifying his role as the Washington closer and go-to guy, Ron notched a league-leading 29 saves and ended the year with a 7-6 record.

While Ron Kline's numbers slipped a little in 1965, the year was a success overall. Kline was the ace of the Senators bullpen and was good enough to received attention from outside the city. He was even given a few MVP votes. Clearly Ron had a spot in the pen for the foreseeable future, as long as he could continue to come in and shut down the opposing batters.
Posted by Spiff at 10:00 AM