All pitching leads to Boston. 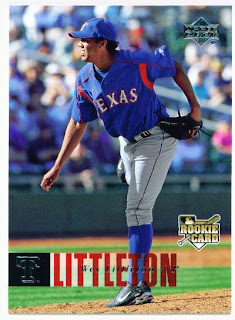 Texas sent Wes Littleton to Boston yesterday. Littleton, seen here on card number 1201 of the 2006 Upper Deck set, had been designated for assignment just prior to the deal.

According to MLB.com, the Rangers sent Wes to the Sox in exchange for "future considerations". Whether this means the Rangers get the biggest piece of Grandma's apple pie at Christmas or simply an apology for wedgies handed out as young children is yet to be determined. There are unsubstantiated rumors that actual baseball players or cold hard cash might be involved as well.

Speaking of cash, apparently money not only can't buy you happiness, it also can't buy you friends. Young Japanese star Junichi Tazawa has turned down Texas' offer to play ball for them. In spite of having the largest offer, the Rangers are stuck watching Tazawa head off to, you guessed it, Boston.

Not sure I understand that. The Sox have several other Japanese pitchers and supposedly that is the draw. Of course that will also be a bar to breaking into the rotation. If I were a young phenom I would think that the most potent offense in the Bigs and weak rotation would be enticing. What better place to break in big, get the insurance runs you need, and look good for other teams?
Posted by Spiff at 7:16 PM

I was impressed the one time I saw Littleton pitch in OKC. He had an arm on him.