Turning on the heat. 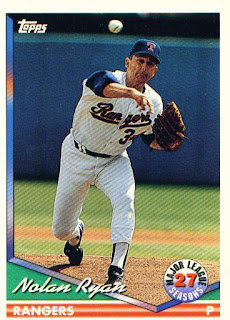 Rangers president Nolan Ryan knows pitching. After all, as card number 34 in the 1994 Topps set indicates, he did it in the Bigs for 27 years.

That length of time is just phenomenal and Ryan claims that it was his conditioning regimen that allowed him to last that long. Who's gonna argue with the king of K's? Not me. Apparently not anyone in the Rangers organization.

Frustrated by the 14 pitchers placed on the disabled list last season, Ryan has decided to retool the Rangers' pitching philosophy. Time to crack down, work out, and push the pitching staff to go further and be tougher. One of the several conditioning camps scheduled for this year is already in full swing. The goal? Get pitchers who can perform and not end up with a sore this or that. Sounds good to me. Here's to hoping it works.

While Nolan holds the pitching staff's feet to the fire, the off-season has been heating up as well. Looks like Billy Beane is trying to make opposing teams sweat a little with the acquisition of Matt Holliday. Obviously Beane is a brilliant operator, I just wonder who will replace Huston Street in the A's pen. Haven't had the opportunity to check with my A's advisor (my brother) about this latest move.

Meanwhile enough pitching to satisfy anyone is about to hit the free agent market on Friday. Looks like the price tags for most of it will be enough to make a Steinbrenner blush. Texas has said they will be cautious with free agent pitching. After their luck with Jennings and McCarthy perhaps that is a wise move.
Posted by Spiff at 4:49 PM

Yea, Ranger fans have to be fearful when the teams signs Free Agent Pitchers. Our history is not fantastic.