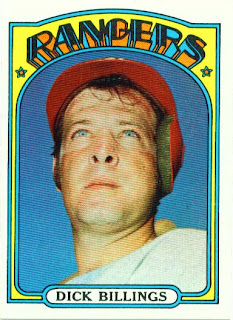 Ok, another slow baseball news day so we take another gander at the Rangers' first cards. Today we see card number 148 in the 1972 Topps set, Dick Billings.

By the time Billings showed up for odd-angle photo day he was in his fourth season in the Majors. In that year he would appear in 116 games and in the team's first year in Texas he would show in a career high 133 games. He would also post his highest career batting average in '72. As he gazes over the photographer's head, Dick seems to be looking toward his career year.

This card has Billings listed as a catcher. In fact, during his career he played every position except the center infield spots and pitcher. He was primarily a catcher though, making 248 appearances at that position.

Billings didn't stick with Texas long after the move south though. Late in the 1974 season the Rangers sold him to St. Louis. He would be released by that team a little over a year later.
Posted by Spiff at 6:08 PM

I know. With one or two exceptions they all look pretty bad.

I just interviewed former Rangers P David Clyde. We discussed his catchers and obviously Dick Billings was one of them. Bill Fahey, Ken Suarez and Jim Sundberg were the others.
I have always had an affinity for backup catchers (Hence my Backup Catcher Hall of Fame idea), maybe because I was a backup catcher (actually, even when I was a starting catcher).

Thanks for the comment. I would love to read your interview with David Clyde. Sounds like an interesting conversation.