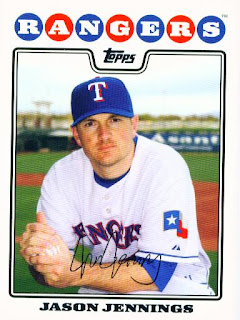 The Rangers offered Milton Bradley arbitration yesterday. They declined to do so with Jamey Wright, Ramon Vazquez, and Jason Jennings.

If Bradley can repeat this past season's performance he could be a key player should he accept arbitration. Bullpen workhorse Wright and utility infielder Vazquez will be missed and it could be argued that Texas should have considered offering them something.

Not so with Jennings. Jason, seen here on his 2008 Topps card, number 374, spent most of the 2008 season on the disabled list. For his $4 million contract the Rangers got six starts. He lost five of the six and got a no decision on the other. Putting in just 27.3 innings Jason received about $146,520.14 per inning. I find that a bit pricey for an 8.56 ERA and five losses. Letting Jason go looks to be a good decision.
Posted by Spiff at 4:58 PM

Jason Jennings has a Rangers Topps Updates & Highlights card, too, as I discovered last night. Why did they give a guy who only made six starts (it references that on his UH card) another card when he didn't even switch teams?

Mad - I have no idea why Topps would give a second card to a bit player who didn't move.

Joey - Agree with you on both points. I hope it doesn't come back to bite the club.