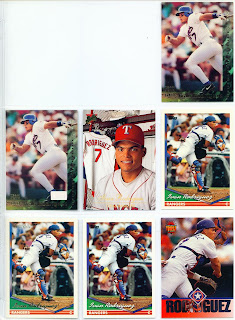 Still no big free agent signings to report. It will be interesting to see how long this goes on before the final flurry. Thus far the Yankees seem to have made the most moves with their signings of CC Sabathia and A.J. Burnett. They are also in pursuit of Mark Teixeira. It would be nice to see them just really tank next season.

In other news, Josh Hamilton has announced that he is planning on skipping the World Baseball Classic. He feels that he could use the time in Spring Training more since he missed so much time away from the sport. Makes sense to me.

Ok, on to the Pudge cards for today. This sheet is only missing two, which is a nice thing to see. Let's take a look.

The two empty pockets are waiting on the 1994 Stadium Club Members Only #ST27 and 1994 Stadium Club Super Teams #ST27. I like the 1994 Studio design but Ivan is wearing that stupid earring that he had for a couple of years and that kind of ruins the picture. Makes him look like some punk kid rather than the best backstop in the business.

One final note for today. Pursuant to a previous agreement, I received a nice package of cards today from Greg over at Night Owl Cards. Due to my lack of Dodgers, the trade was set at 50 cards. Greg went above and beyond and this morning 62 Rangers and one Senator arrived in my mailbox. 17 of them filled holes in my collection. I really appreciate the trade Greg. Extra thanks for the Senator as I don't come across that many. Be sure to check out Greg's blog and see what a class act looks like.
Posted by Spiff at 9:45 AM

Glad I could find a few more for you that you needed. I have another tiny stack of Rangers, but I'm sure it'll be awhile before it's enough to send.

Great trading with you.