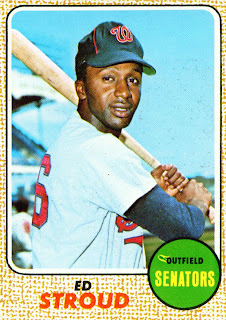 Ed Stroud, seen here on card 31 of the 1968 Topps set, was the starting right fielder for Washington in 1968. It was his first full season with the team. In July of 1967 the Senators had sent Jim King to the White Sox in order to get Ed. Prior to coming to Washington he had played a season and a half for the Sox.

Stroud played 630.1 innings in the field for the Senators in 1968. In that time he saw 144 chances and made three errors for a fielding percentage of .979. That fell below the league average of .981 but not by much.

At the plate Ed managed a .239 batting average and a .284 on base percentage in 327 plate appearances. That was the highest number of times he had been to the plate in a season to that point in his career. Ed bumped in 23 RBI while scoring 41 times himself. He led the team in triples with 10 but managed just four home runs. He walked 20 times and stole nine bases - second highest on the team.

All in all 1968 was not a career year for Ed Stroud. He made improvements in some categories and dropped a bit in others from the previous year. He had a starting job though and was now seeing more more playing time than he had since coming up with Chicago in 1966. What remained to be seen was if he could capitalize on the situation the following season.
Posted by Spiff at 8:27 PM

There were few hitters who had career years in 1968.