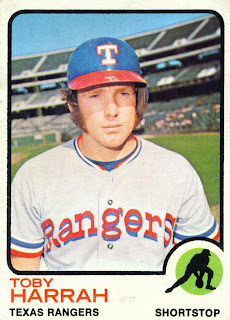 In 1973 Toby Harrah was coming off an All-Star appearance in 1972. In just the second season in Texas he was already becoming one of the better known Rangers' players. He was also sporting some serious sideburns. Today he appears on card number 216 of the 1973 Topps set.

In 1973 Toby would start 117 games while appearing in 128 total in the field. 76 of those games were at shortstop. In 603.1 innings at short Toby handled 319 chances while committing 19 errors for a fielding percentage of .951. That was 12 points below the league average.

While primarily a shortstop Harrah also played 52 games at third. 408.2 innings on the hot corner saw him handle 126 chances while committing eight errors. His .937 fielding percentage was 14 points below the league average.

Toby did better on offense though. He went to the plate 519 times during the season. He worked 48 walks and was hit twice. His .260 average wasn't much to write home about but he had ten home runs, second only to Jeff Burroughs in the starting nine. His 16 doubles were just barely third. Flashes of the power that Harrah seemed to be developing.
Posted by Spiff at 8:39 PM

Nice...I don't think I have this one. Those are some serious sideburns!