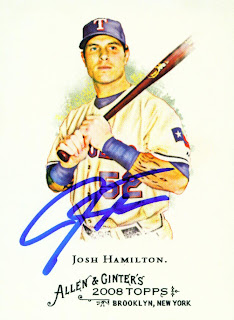 Josh Hamilton, shown here on an autographed 2008 Allen & Ginter card, was robbed last night. No doubt about it.

In his first at bat Josh hit a home run. In his second chance he also homered. Problem was that the umpires called it a double. No review. Josh asked the umpires if they wanted to review the call. Nope. Replays clearly showed the ball clearing the inner fence. That's a home run. Clearly a muffed call. At least the Rangers won anyway.

My question is, why did the owners approve instant replay? Perhaps for situations such as this. Perhaps. Kind of hard for it to make a difference if the umpires won't use it.

Speaking of making a difference, make sure your voice is heard in the run up to the Strat-O-Matic contest.
Posted by Spiff at 7:04 PM

Labels: Allen and Ginter, Autographs, Card of the Day

yep i went to that game...seriously how many times is instant replay even used? rarely..it would have taken two minutes to check and make the correct call. once again, i guess the umps think we are there to watch them....i was outraged at no replay. i bet replay occurs less than 20-30 times all year and failing to check that one was inexcusable.way to go doug eddings and dana demuth...you guys are awesome!! -CW13