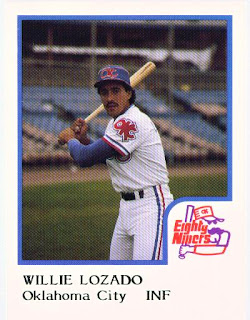 For the first time ever on this blog I am posting the same card twice, 1986 ProCards Willie Lozado. I do have a reason though.

You may remember that I previously posted Willie's card with the post title of Where's Willie? Well, he's alive and doing well it seems. A week and a half ago I got an email from him. Mr. Lozado had seen my post and was writing in response.

Turns out that he has been working for a connector manufacturing company for the past 13 years. He is also still the president and coach of the New Albany Redbirds baseball team. The league the team plays in promotes academics and baseball fundamentals. Mr. Lozado has also faced some health challenges in recent years but has been able to overcome them.

I emailed Mr. Lozado back and he graciously agreed to an e-mail interview. That's why we have the double post of the same card. I only have one card of Willie Lozado. I figured that the first ever Texas Rangers Cards interview with a professional ballplayer warrants seeing the card again. Without further delay, here is the interview:

(Texas Rangers Cards) What led you into pro ball?
[Willie Lozado]A lot of practice and a little luck.

(TRC) You were drafted by the Detroit Tigers in the 18th round of the 1977 draft but didn't sign. After being drafted in the 3rd round of the 1978 draft by the Minnesota Twins you again didn't sign. In December of 1978 you signed with the Milwaukee Brewers. Why didn't you sign when drafted and why the Brewers later?
[WL]I wanted to get more experience at the level and when the Brewers offered me a contract the timing was right. Had no idea I would have to beat out Robin Yount at the time. Had I known I would have signed with the Twins.

(TRC) On November 14, 1985 the St. Louis Cardinals released you from their organization. In 1986 you played in the Texas Rangers system. How did you come to play for OKC?
[WL]My agent at the time spoke with the Rangers about signing me and Tim Foli was my coach in winter ball that year so he may have put in a good word as well, went to big league camp and was sent down to OKC, not a good spring training.

(TRC) It appears from the records I was able to find that your last year as a pro was 1988 in the Kansas City Royals system. Was that your decision? If so, how did you know it was time to call it a career?
[WL]I actually played in 1989 in , Omar Minaya was able to get me a spot there. I was offered a coaching job when I got released in '86 but declined it at the time, one of several bad decisions I have made as a young man. It was not my decision to call it quits, it was time to move on and although difficult in the beginning I managed to confront all obstacles head on to achieve my goals. I sometimes wish that I was coaching in the big leagues as I have a lot of former teammates coaching and even managing in the bigs but I feel I am making a difference in my community so in the long run God wanted me where I am today.

(TRC) What was the biggest challenge you faced, on or off the field, during your playing career?
[WL]The biggest challenge for me as a player was to stay focused on the game and not let the outside distractions and influences interfere with your baseball career. I personally feel that a lot of young players today face the same challenge. I definitely would have changed a couple of things had I been given the opportunity to do it over. I definitely have used my experience to encourage others to make better decisions than the ones I made when I was younger.

(TRC) Do you accept autograph requests through the mail? If so, how many do you typically receive?
[WL]I do accept autographs through the mail but any more than 2 cards I will keep them and give them to kids that I know. I definitely do not mind signing autographs, in fact for me it is an honor and a privilege however whenever more than 2 requests are sent to me I assume it is a card dealer that will profit from it therefore I will sign 2 max and keep the rest. I usually get between 5-10 a month.

Some great information there. Clears up how Willie got into the Rangers' system and why he didn't sign when first drafted. I also had no idea that he played ball in Italy. Thanks a bunch to Mr. Lozado for taking the time to contact me and answer my questions. I really appreciated hearing from you and learning more about your career.

Very cool. Always great when a player recognizes the fans, here on the blogs or otherwise.