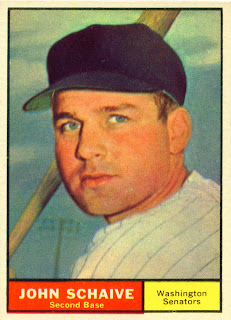 Getting back to Senators Saturdays we have Johnny Schaive today on card number 259 of the 1961 Topps set. John, like Rudy Hernandez, stayed behind when the original Senators moved to Minnesota. The new franchise took him from the Twins in the December 1960 expansion draft.

Perhaps it is fitting that John's hat has no logo on this card. He would spend the entire 1961 season at Triple A. His time there was with the Columbus Jets of the International League. Interestingly, that team was affiliated with the Pittsburg Pirates at the time. What makes this more interesting is that John would be back with the Senators organization in 1962 and there is no record that I can find of any type of transaction between the Pirates and Washington. Kind of makes me wonder if there was some sort of deal worked out between the two teams while Washington got its farm system up and running. Anyone have any insights?
Posted by Spiff at 4:35 PM