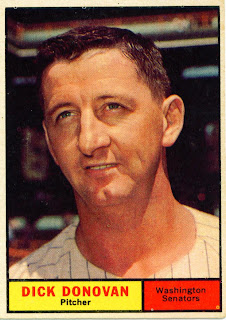 Dick Donovan was the 54th player taken in the December, 1960 expansion draft. As you may be able to tell from his jersey, the Senators got him from the White Sox. Dick had to settle for the hatless, old jersey look on card number 414 of the 1961 Topps set.

In Dick Donovan the franchise had its first award winner. In 168.2 innings pitched Donovan posted a 2.40 ERA and a 1.026 WHIP. Both of those numbers led the American League. He also struck out 62 of the 671 batters he faced while walking just 35 of them. That was good enough to get him selected for the All-Star game and to garner a few MVP votes.

Interestingly, Dick's record at the end of the season would stand at just 10-10 in 22 starts and one relief appearance. That in light of his ERA and WHIP and the fact that he threw 11 complete games tells just what sort of team Washington fielded in its first year. Guess that goes to show why some are moving away from win/loss records as an indicator of how good a pitcher is.

Dick Donovan had pitched his heart out in 1961 but the team had been unable to capitalize on his performance. At least they hadn't been able to on the field. In October of 1961 the front office attempted to as they sent Donovan to the Cleveland Indians along with Gene Green and Jim Mahoney. In return the Tribe sent Jim Piersall to Washington. After one memorable season Dick Donovan was no longer a Senator.
Posted by Spiff at 12:20 PM