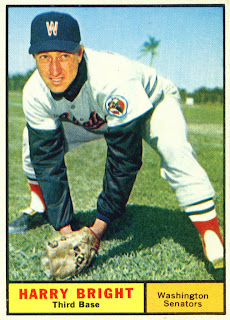 Happy New Year everyone! I trust that all had an enjoyable evening last evening and will have a great year.

Starting the new year off on a bright note here. Well, Harry Bright that is, as he appears on card number 447 of the 1961 Topps set. Harry is in the higher numbered part of the Topps set and so his card was issued in the last series. As such we actually get to see a Washington Senators' uniform for the first time. Not bad looking really. Gotta like those socks.

Washington traded Bobby Shantz to the Pittsburg Pirates in December of 1960 to get Bright, Bennie Daniels, and R.C. Stevens. Harry would end up as the backup third baseman to Danny O'Connell. He would also make brief appearances at catcher and second base.

In 334 innings in the field at third base Bright would post a .928 fielding percentage. That was well below the league average .951. Probably accounts for his being the backup rather than the starting third baseman.

At the plate Harry put together a .240 batting average and a .310 on-base percentage in 204 plate appearances. He would have six doubles and four home runs but no triples. That and his being caught stealing in his only two attempts indicate that while Harry may have been bright, he wasn't very quick. One troubling trend with Harry was that he struck out 23 times and only walked 19 times.

That strikeout to walk ratio with little power behind it is not a good thing. Bright would need to address that if he hoped to get a starting job in 1962.
Posted by Spiff at 12:54 PM