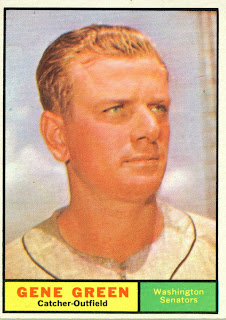 Gene Green, shown here on card number 206 of the 1961 Topps set, was the first primary catcher in Senators' history. The team picked him up from the Baltimore Orioles in the December, 1960 expansion draft.

In 1960 Gene had a cup of coffee with the Orioles. Prior to that he had spent three seasons with the St. Louis Cardinals. Two of those seasons were in a backup role and one was as the Redbirds starting right-fielder. That would change with Washington in 1960. Gene would be first-string and most of his games would be behind the plate.

Green responded well to the change of scenery. His defense was pedestrian with a .986 fielding percentage - three points below the league average. He also allowed 13 passed balls and 68% of would be base thieves got away with it.

Green's numbers were good enough to lead the Senators in home runs and slugging percentage. They were also good enough to catch some attention outside to organization. On October 5, 1961 Washington sent Gene, Dick Donovan, and Jim Mahoney to the Cleveland Indians for Jim Piersall.
Posted by Spiff at 10:24 AM