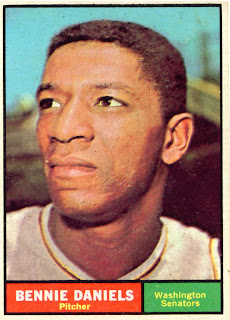 Today we have the Senator's first ever wins leader on card number 368 of the 1961 Topps set. Bennie Daniels was 12-11 for the 1961 season. Not real good but good enough to lead the team in wins. Washington picked Daniels up from the Pirates in a December 1960 trade.

Bennie didn't stop at pitching though. His .197 batting average included 15 hits, two of which were home runs.

Overall Daniels had responded well to the transition to the American League. He appeared to be poised to make a new start along with the franchise.
Posted by Spiff at 8:26 PM