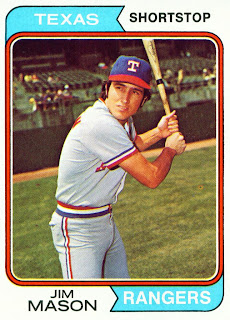 Jim Mason, pictured here on card number 618 in the 1974 Topps set, wasn't with the Rangers in 1974. He had been with the team since being drafted by the Senators in 1968 but had lost the shortstop job to Toby Harrah.

After playing backup in 1973 Jim was sold to the New York Yankees on December 6th. This wouldn't end Mason's career as a Ranger though. He would play for the Evil Empire for three seasons. In November of 1976 the Toronto Blue Jays would grab him from New York in the expansion draft. During the 1977 season he would return to Texas in a trade with the Jays. What happened after that is a topic for a future post.
Posted by Spiff at 10:53 AM