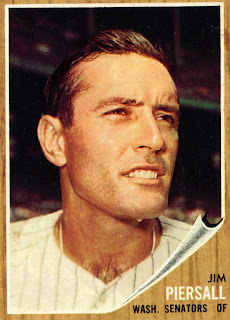 Yes, this is the Jim Piersall. Washington traded for him on October 5, 1961. In return they sent Dick Donovan, Gene Green, and Jim Mahoney to the Indians. Not sure if this is an Indians jersey that Jim is pictured in on card number 90 of the 1962 Topps set.

1961 was one of the best, if not the best, season of Piersall's career. The Senators gave up a lot for him and expected a lot in return.

On defense the team got their return. Jim played 1073 innings in center field. In 320 chances he committed just one error for a fielding percentage of .997. That was well over the league average of .986. Those numbers are even more impressive when one stops to consider that Piersall had better range than the average American League centerfielder in 1962. Surprisingly, in spite of leading the league in fielding percentage for centerfielders, Jim didn't win a Gold Glove.

While the Senators seemed to get their money's worth from Jim on defense he was a bit of a disappointment at the plate. In 515 plate appearances he posted a .244 batting average and a .301 on-base percentage. Both were significant drops from his 1961 numbers. His walks, doubles, triples, home runs, and RBI totals all dropped off as well. About the only offensive numbers that went up were stolen bases, caught stealing, and strikeouts. Not good, over all just about the worst of any of the regulars.

The Senators had made a pretty big investment in Jim Piersall. Well, big for them. They definitely got satisfaction from his defensive skills. While his offense was a let down it wasn't nearly as bad as it would have been without the defense to cushion it. The challenge for 1963 would be to rediscover his bat while keeping the glove in top shape.
Posted by Spiff at 12:02 PM