Catching the train for Baltimore. 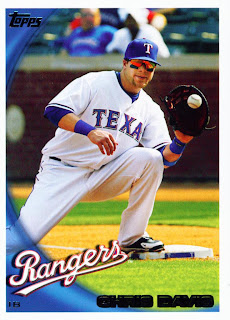 Well, on the same day that Derek Holland tossed his third shutout in five starts, the Rangers seem to have made a trade to try and bolster to bullpen. MLB.com is reporting that the deal is all but finalized.

Reportedly Texas sent Chris Davis, shown here on card number TEX5 of the 2010 Topps Texas Rangers set, and Tommy Hunter to Baltimore in exchange for Koji Uehara. File this one under the "I hope this wasn't a mistake" heading.

I had figured that Davis was gone. To be frank, as much as I like Chris Davis he just wasn't sticking with the Rangers. After this year the Rangers would have been out of options on him so moving him made sense.

Where I begin to wonder about this trade is where Tommy Hunter gets involved. Uehara has his upside. He's pitched 47 innings in 43 games this year for the O's, most in late-inning relief. His ERA stands at 1.72 and his WHIP at 0.70. Those are some good numbers to see coming to the Rangers pen with their trouble holding narrow leads.

The problem is that Tommy Hunter also has an upside. His ERA stands at 2.93 and his WHIP at 1.11 in 15.1 innings for Texas. Those innings have come in just eight games. That's some good news if your starter stumbles or you need a spot start in a makeup game. Tommy's also had some success as a starter in the past so if a hole develops in the rotation coming down the stretch he could be used to plug it.

Koji Uehara has started in the past, not well though. He's also eleven years older than Hunter. The age and the ability to start well are where I really grimace at letting Tommy go. Wish the Orioles would have taken Scott Feldman instead.

I sure hope this works and doesn't turn into a situation where a long-term third starter got sent to Baltimore for a one or two year short relief guy.
Posted by Spiff at 6:57 PM