Odd Moments: Canseco on the mound. 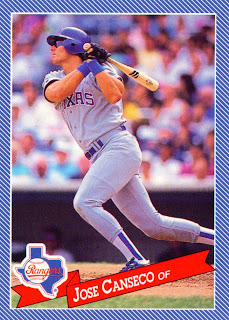 Sloppy, that about sums up last night's loss to Minnesota. Texas should have won but got sloppy.

With Michael Cuddyer appearing on the mound for the Twins in Monday's game I thought it might be appropriate to take a look at number three on T.R. Sullivan's list of bizarre moments in Rangers history. Since I have previously posted the only card that I am aware of that shows this incident you will have to settle for Jose Canseco on card number 10 of the 1993 Hostess set.

On May 29, 1993 the Rangers were visiting the Red Sox. Things did not go well. By the eighth inning the Sox were pounding Texas to the tune of 15-1. In trotted Jose Canseco to pitch the eighth.

Jose would manage to end the game by pitching the full inning. He allowed three earned runs on two hits and three walks for a final career ERA of 27.00. I suppose that he at least saved an already weak bullpen.

Problems arose though when Canseco missed nine of the next ten games due to back and right forearm/elbow problems. After that things seemed to smooth out a little as he played in the next nine games. Of course four of those appearances were as the designated hitter. The pain persisted though and Jose was placed on the 15 day Disabled List on June 24. On June 28 he was diagnosed with a complete tear of the ulnar collateral ligament. On July 9 he underwent reconstructive surgery - commonly called Tommy John surgery. That was it for the rest of the 1993 season.

There has been a lot of debate since manager Kevin Kennedy sent Canseco to the mound in Boston. One of the most frequently asked questions is why did he use Jose? Why not a utility player or backup? Why risk the big gun in the lineup with a potential injury?

Various answers are given to these questions. Some blame Kennedy's inexperience. Some look to Canseco's legendary ego and his loud pronouncements of ability to accomplish various feats. Whatever the reason, the decision was catastrophic. Less than a year after trading for Jose Canseco Texas had lost his services for a half a season.
Posted by Spiff at 11:06 AM