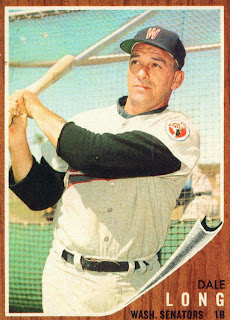 Today is a pre-scheduled post. Mrs. Spiff is repainting the room we normally keep out computer in so I will be unable to post scans for a couple of days. As such, my posts may not match with what the Rangers are doing.

Going into 1962 Dale Long, shown here on card number 228 of the 1962 Topps set, was the Senators starting first baseman. He was looking to keep his job in 1962. To do that he would need to improve on the previous season. He would struggle mightily.

While Long was having a tough time at the plate his glove work was improving. In 411.2 innings in the field he committed just two errors. This gave him a .996 fielding percentage. That was six points higher than the league average and a 13 point improvement over 1961.

Apparently Washington felt that they had other options at first base. The Yankees wanted Long back and the Senators were willing to work a deal. On July 11, 1962 they traded Dale to New York. Don Lock came to Washington. The deal would be a good one for the Senators. Lock would help power their offense through 1966. Long wouldn't appear in the Majors after 1963.
Posted by Spiff at 12:02 PM