Out of the gate strong. 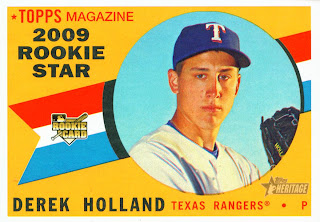 The Rangers started off strong last night in their first game following the All-Star break. Derek Holland, shown here on card number 560 of the 2009 Topps Heritage set, took the mound in Seattle.

I have to admit that I wasn't real comfortable with Dutch on the hill. In his last start he threw a complete game shutout so that was good. In the start before he got knocked out in the first inning after giving up five runs so that was bad.

Derek apparently wanted to prove that his last start was no fluke. Through five innings he had a perfect game going. He lost it in the sixth but got back on track and got out of the inning without damage. All told he went nine shutout innings while giving up just five hits and one walk. He struck out eight Mariners in route to his eighth win of the season which also happened to be the Rangers eighth win of this streak.

Before the game Ron Washington watched his team work out and then declared that they were ready to play ball. That they were as the offense came alive for five runs. Hamilton, Cruz, and Napoli all homered. Torrealba, Kinsler, and Young doubled. Gentry and Napoli also stole bases.

All in all a good game. Nice to see the team clicking on all cylinders to start the second half of the season. Time to get that roll going that will help them pull away from Anaheim.

I will admit that Holland did look solid last night. Do remember that is is the Mariners though. Neither Felix or Pineda was on the mound, so we had no chance. This lineup shouldn't really scare the Rangers.

Do you think it is possible the Rangers could take their foot off our throats and let us score a run? Our offense is getting worse and worse. I don't know why I continue to love this team, but I do.

Well, they finally did score a couple of runs. Of course the Rangers also beat Felix so I guess it all evened out.