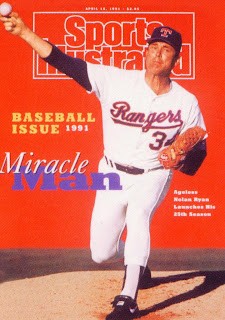 Nothing positive to say in the sixth inning of tonight's game. Looking like a pretty bad loss shaping up. As such we will move on to number four on T.R. Sullivan's Fifty Best Seasons list.

Nolan Ryan was 42 years old in 1989 - his first season with the Rangers. Like card number 49 of the 1989 Sports Illustrated Covers set says, he seemed like a miracle man.

Nolan started 32 games for Texas and won 16 of them. He completed six games and tossed two shutouts. Four potential no-hitters died in the eighth inning or later. His ERA was 3.20 for the season and his WHIP tallied to 1.086.

In the 239.1 innings that Nolan pitched in 1989 he struck out 301 batters. That total was the best in the American League. In comparison he walked just 98 batters unintentionally. Roger Clemens was second in the strikeout totals with 230. One of Ryan's strikeouts was number 5,000.

As a result of his performance Ryan was named to the All-Star game and got some Cy Young consideration (5th). Not bad for a pitcher who was old enough to be retired from playing the game.
Posted by Spiff at 7:17 PM