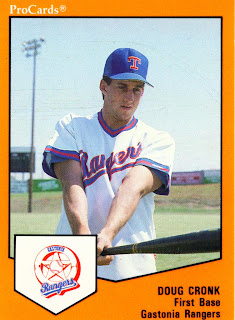 Doug Cronk, shown here on card number 1013 of the 1989 ProCards set, was the Rangers 22nd selection in the 1988 draft. In 1988 he played for the GCL Rangers in Rookie ball. In spite of some struggles there he was moved up to Single A for the 1989 season.

In 1989 Doug would play in 133 games for the Gastonia Rangers. He would make 562 plate appearances during the season. His batting average would total to .251 and his on-base percentage to .351. The on-base percentage was helped by the 74 walks he worked and the three times he was hit by a pitch. Cronk had some power. 22 of his 120 hits were home runs and 17 more were doubles. Three were triples. He also knocked in 77 RBI. Unfortunately Doug struck out like a power hitter might - a lot. 132 times in 1989.

In addition to the strikeouts Cronk also struggled a bit in the field. His 14 errors during the season contributed to his .989 fielding percentage. Not real good for a first baseman.

1989 was not a good season for Doug Cronk. His defense could be improved with work. The high number of strikeouts and low batting average were big red flags - especially at Single A. Apparently his swing had a hole in it and even at that level of play the opposing pitchers had found it. Doug needed to find and close it quick if he wanted to move on up the ladder to Arlington.

Hi,
I'm the Sports editor at Before It's News. Our site is a People Powered news platform with over 3,000,000 visits a month and growing fast.
We would be honored if we could republish your blog RSS feed in our Sports category. I would really like to boost my baseball card content.
Please email me at KMiller@beforeitsnews.com so our readers can start looking at the Texas Rangers Card Blog.
Thanks,
Krystal