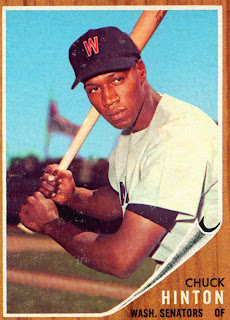 Chuck Hinton was the Senators go to guy in 1962. Hinton, shown here on card number 347 of the 1962 Topps set, had more plate appearances and appeared in more games than any other position player on the team.

Chuck played all three outfield positions, second base, and even a couple of innings at shortstop. In total Chuck put in 1,138 innings in the outfield. He saw 243 chances and handled all but three of them successfully. That gave him a .989 fielding percentage - well above the league average .980. At second base Chuck handled 55 of the 56 chances he saw in 90 innings for a .982 fielding percentage. That was two points above the league average .980. Chuck's two innings at shortstop were more of a cameo appearances than anything else. He didn't even get a ball hit to him.

That performance made Chuck one of the few bright spots for the Senators in 1962 and even generated some MVP consideration. It also brought into question Jim Piersall's role with the team in 1963.