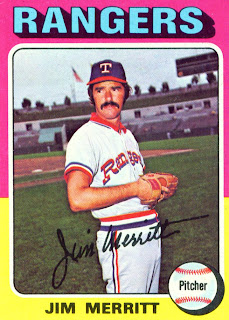 Jim Merritt had a short, rough season in 1975. Merritt, shown here on card number 83 of the 1975 Topps set, would be making his final appearances in a Major League uniform.

Jim had been fighting an old arm injury since 1970. It flared up again in 1974 and resulted in a three week stint on the Disabled List. In spite of encouraging signs towards the end of the 1974 season things were not good.

In 1975 Merritt would appear in five games for Texas and would pitch just 3.2 innings. He walked none and struck out none while allowing one unearned run. His WHIP would tally to 0.818.

In spite of those numbers, the lefty was hurting. The season was not the comeback season it was supposed to be, instead it was a final footnote in a ten year career. At age 31 Jim Merritt had to hang up the spikes.
Posted by Spiff at 4:37 PM