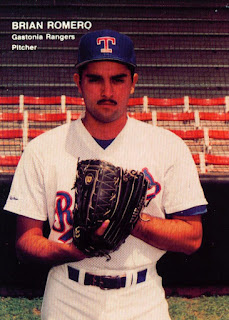 Brian Romero, shown here on card number 301 of the 1990 Best set, is something of a mystery to me. Texas picked him up in 1988 but he didn't play that season due to injury. Kind of makes me wonder if he was a long-shot gamble. In 1989 the lefty appeared in 10 games for the Butte Copper Kings, all but three as a starter. He did well and got the promotion to Single A for the 1990 season.

Looking at the numbers it appears that Brian's successful comeback from injury continued in 1990. With Gastonia he posted a 1.48 ERA in 91 innings pitched. His WHIP tallied to 1.198. He started all 15 games he played in and racked up a 9-2 record. Not too shabby.

Apparently somebody was impressed. Romero didn't end the season with Gastonia. Instead he moved to A+ ball and made 12 more starts for the Charlotte Rangers before the end of the season. His success continued at that level as well.

Brian Romero looked to have recovered fully from the injury that cost him the 1988 season. After two years in the minors he would start the 1991 season at Double A Tulsa.
Posted by Spiff at 12:40 PM