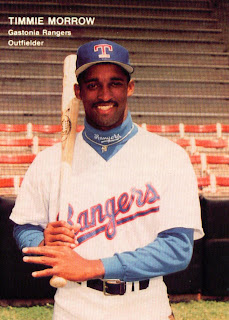 Getting back to Minor League Monday today with Timmie Morrow. Timmie appears here on his 1990 Best card, number 284 in the set.

Morrow was a second round draft pick for Texas in the 1988 draft. He played for the Gulf Coast League Rangers in 1988 and the Butte Copper Kings in 1989. Both of those years are reflected on the back of his card. What isn't there is the one inning he pitched for Butte in 1989. It wasn't pretty.

In 1990 it was on to Gastonia for Timmie. He would play in 105 games that season and make 424 plate appearances. In those plate appearances he would post a .206 batting average and a .275 on-base percentage. Those were not good numbers for Single A ball. Add to that the fact that he struck out 99 times in 1990 and it was clear that Morrow was struggling.

Timmie didn't have a good season in 1990. For a second round draft pick in his third season of professional baseball it was really bad. The Rangers weren't quite ready to give up though and neither was Morrow. If he wanted to make this work though he would need to start hitting and cut down on the strikeouts.
Posted by Spiff at 5:42 PM