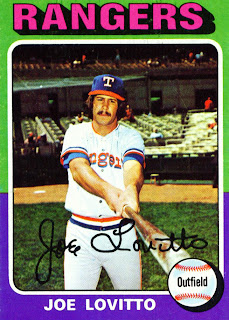 1975 was a rough year for Joe Lovitto, pictured here on card 36 of the 1975 Topps set. Injuries stalked him that season and he ended up being put on the Disabled List several times.

Joe's limited playing time meant that he was unable to retain his starting center fielder job. That resulted in a jack-of-all trades season for him. He did put in 174 innings in center though and didn't muff a single chance. He also put in 69.1 innings in left field with only one error. There were also nine innings at first base without an error and even one game where he was put in as catcher but didn't see any action.

1975 had definitely been a setback season for Joe Lovitto. The injuries, lowered offense, and crowded outfield had combined to place his future with Texas in doubt.
Posted by Spiff at 5:09 PM