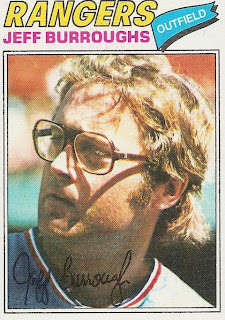 Perhaps it is fitting that Jeff Burroughs appears hatless and without his jersey clearly visible on card 55 of the 1977 Topps set. After all, by the time this card was emerging from packs, Burroughs was no longer a Texas Ranger.

Continued power decline in 1976 led Texas to conclude that Jeff Burroughs was not the Rangers right-fielder of the future. Management was looking to make a move and Jeff's apparently deteriorating skills with the bat made him expendable.

The change of scenery proved beneficial for Burrroughs as he hammered 41 home runs in 1977 for the Braves. That probably turned a few faces red in the Rangers front office.
Posted by Spiff at 11:56 AM

Part of what was going on with Burroughs was from the ballparks and not his hitting. Arlington Stadium was long known as a pitcher's park until the large billboard renovation was completed before the 1984 season. On the flip side, the Braves' Fulton County Stadium was known as the launching pad. So, it's not so much that Burroughs' hitting improved as much as he just changed home parks.