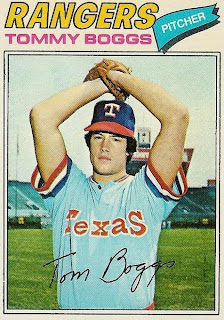 Son of an IBM executive, Tommy Boggs was the Rangers first round draft pick in 1974 and the second player taken nationwide. He had a trial by fire in his first Major League action in 1976 but showed some promise. 1977 was the season the franchise was hoping Boggs would deliver on his potential.

As bad as those numbers were, they were an improvement over the rest of Bogg's season. He spent most of the 1977 campaign with the Rangers Triple A affiliate, the Tucson Toros. He appeared in 22 games for the Toros, all but two as the starting pitcher. Over 97 torturous innings his ERA tallied to 8.54 and his WHIP to 2.206. His 5-10 record seems to be more of a credit to his teammates rather than an indication of a lack of run support.

Ugly. That is probably the best word to describe 1977 for Tommy Boggs. While the Rangers were enjoying a breakthrough season he was suffering a severe setback in his career. The silver lining was his draft ranking. Being a number one pick he was unlikely to be banished to Triple A permanently. He would get a few more chances. Tommy needed to figure out what went wrong in 1977 and be ready for the next roster opening in Arlington.
Posted by Spiff at 4:21 PM

Boggs was a graduate of Austin's Lanier H.S. He's probably the most famous grad of that school, which today is best known for horrible academics and bad sports teams. I remember too that Boggs had another stint with the Rangers in '85 at the end of his career.