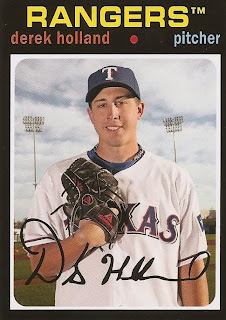 Well, Derek Holland took the mound last night with the Rangers 1.5 games out of the second Wild Card spot and hope ebbing fast. The Astros are in town but Texas does not play another contender for the rest of the way. They are going to have to keep winning and hope for either Cleveland or Tampa Bay to stumble.

Holland, shown here on card number 64 of the 2012 Topps Archives set, lived up to his potential. Yes, it was against Houston late in the season. It was also a complete game six-hit shutout in which Dutch struck out nine. Astros or not, that's still a very nice outing.

Unlike in recent days, the offense backed up a good performance by the pitching staff. Scoring two runs in the first, one in the second, four in the third, two in the fourth and three in the sixth; the bats put 12 total runs on the board.

Amazingly, Alex Rios was the only Ranger to hit a home run. He did so in the fourth inning while en route to a 4-for-4 cycle. Any time a Ranger hits for the cycle I can't help but think of Oddibe McDowell, the first player in franchise history to hit for the cycle.

The good news coming from last night is that Texas picked up half a game on an idle Cleveland club. Now only a game out, it is not beyond the realm of possibility they could climb back into the Wild Card chase. Not likely but but not completely out of the question. Can't decide if I should get my hopes up again or not.
Posted by Spiff at 11:33 AM