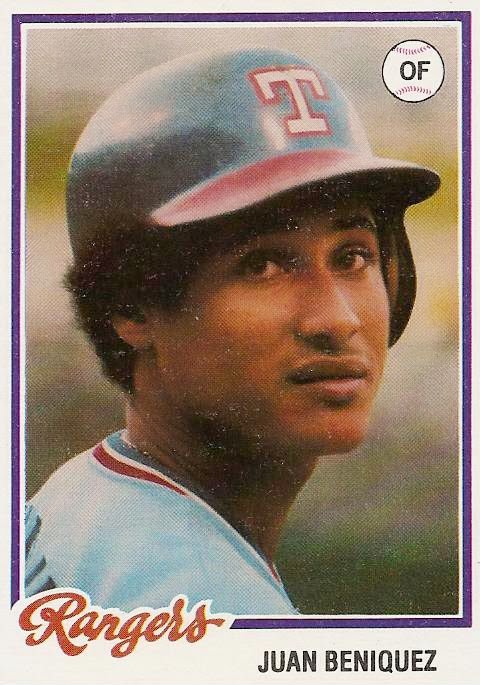 Juan Beniquez, shown here on card number 18 of the 1978 Topps set, was coming off a great 1977 season and seemed to have the Rangers center field job nailed down.

Juan played in 127 games for Texas in 1978 and put in 1097.2 innings on defense. All of his time in the field was in center field. Beniquez saw 328 chances and handled all but nine of them without mishap. Those nine errors led to a fielding percentage of .973. For the first time as a Ranger Juan was below the league average fielding percentage.

On the other side of the ball, Juan made 510 trips to the plate and ended up with a .260 batting average. His 20 walks and three hit by pitches bumped his on-base percentage up to .292. Both numbers were drops from the previous season with the on-base percentage being a significant drop. Beniquez did manage to retain his power at the plate with 17 doubles, three triples, and  11 home runs. The doubles and home run totals were very similar to the previous season but the triples were only half of what he hit in 1977. Perhaps the reason for the lower number of triples was that Juan was slowing down. He had just 10 stolen bases while getting caught 12 times.

1978 was not the best follow-up to 1977 for Juan Beniquez. After battling hamstring issues in 1977 he seemed to be having difficulties again as his speed was ebbing. His glove had also failed him. Juan needed to address the glove issue as soon as possible. He wasn't a power hitter and his defense and speed on the bases is what carried his career to this point. If he was losing his speed he would need more glove to pick up the slack.
Posted by Spiff at 11:36 AM