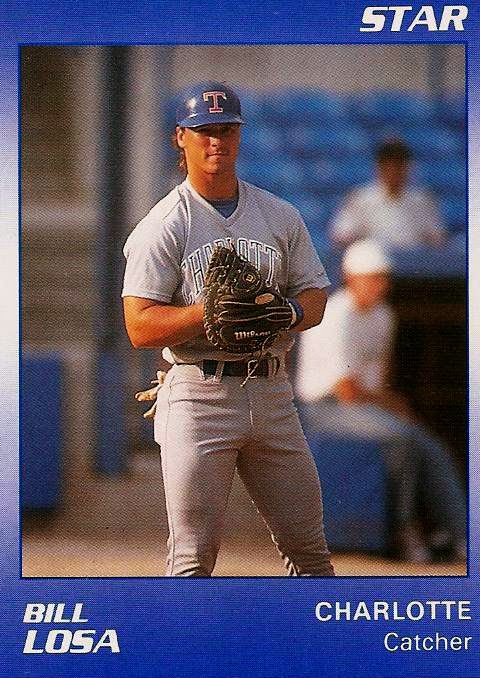 I have no idea why my scanner all of the sudden does not like Star's 1990 design. Whatever the reason, these cards are badly mis-cut but not poorly printed.

Selected by the Rangers in the 18th round of the 1987 draft, Losa started his pro career the same year with the Rookie League Gulf Coast Rangers. He split the 1988 season between the Gastonia Rangers and the Butte Copper Kings. 1989 found him with the Charlotte Rangers and he stayed with the team for the 1990 season.

Losa caught in just 13 games for Charlotte in 1990 and saw 83 chances. He ended the season with a .940 fielding percentage. That was a 35 point drop from the previous season.

In his 64 trips to the plate Bill managed to put together a .264 batting average and a .391 on-base percentage. Both were significant jumps from 1989. Losa experienced a significant power outage though as he hit just three doubles and no triples or home runs.


Bill Losa appeared stalled out at Single A and passed up by Ivan Rodriguez. With the way Pudge was progressing it was looking less and less likely that the Rangers needed to spend a lot of time on 18th round draft picks who were struggling to merit a promotion to Double A.

Probably for those reasons, 1990 was Bill Losa's last season in the Rangers farm system. He played at Single A in the Indians system in 1991. After his bat completely failed him there he hung up the spikes on his pro career.
Posted by Spiff at 12:00 PM