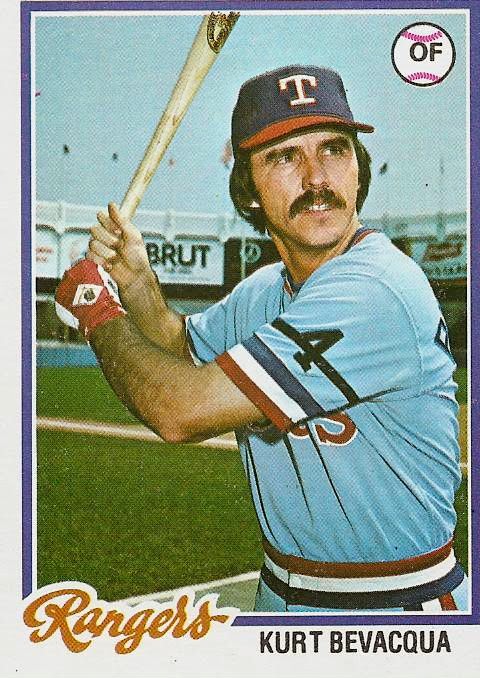 The Rangers picked up Kurt Bevacqua, shown here on card 725 of the 1978 Topps set, during Spring Training in 1977. The Mariners released the 1975 Bazooka Gum bubble blowing champion and Texas thought they would take a chance on him.

He spent most of the 1977 season at Triple A Tuscon but got the call to Arlington on July 21st and spent the rest of the season with Texas. Bevacqua turned in a career year following the call-up and the Rangers were viewing him as a late bloomer coming into the 1978 season.

Kurt spent the entire 1978 season with the Rangers in a utility role. He played 381.2 innings at third base, 79 innings at second base, and eight innings at first base. He also appeared in 16 games as the Designated Hitter.

Bevacqua made 271 trips to the plate in the course of the 90 games he appeared in. He put together a .221 batting average and a .271 on-base percentage. Both were almost 90 point drops from the previous season. His .343 slugging percentage was a drop in the 250 point range from the previous season. Needless to say, Kurt's offense was a disappointing follow-up to 1977.

If the Rangers were right about Kurt Bevacqua being a late bloomer it looked like his time had not yet come. Versatile utility players are great but the sudden absence of Kurt's bat had to be causing concern for both him and the team.
Posted by Spiff at 11:21 AM