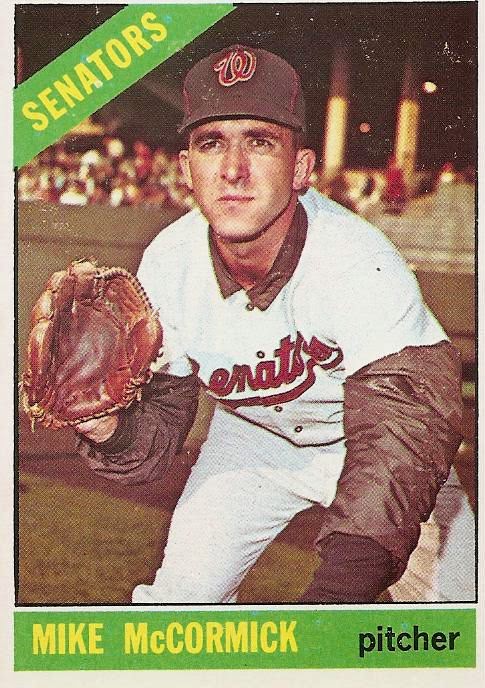 Mike McCormick, shown here on card 118 of the 1966 Topps set, was in his second year with Washington in 1966. The Senators were still hoping for a return to Mike's 1960 form when he led the National League in ERA. 1966 was not the year.

McCormick appeared in 41 games for Washington in 1966, 32 of those games were starts. That put him second in starts behind only Pete Richert in the starting rotation. The 216 innings McCormick pitched were also second to Richert on the the pitching staff.

In those 216 innings Mike compiled a 3.46 ERA and a 1.130 WHIP. Once again he came in second to Richert, this time in ERA among the starting rotation. Eight of McCormick's starts were complete games and three of those were shutouts. He also struck out 101 opposing batters but did issued 51 free passes. For his efforts Mike ended the season with an 11-14 record.

Mike McCormick hadn't had a bad season in 1966. A little more run support and he might have been able to end the year with a winning record. He needed to get the ERA and WHIP down a little more though, if he wanted to stick in the top of the rotation.
Posted by Spiff at 10:33 AM