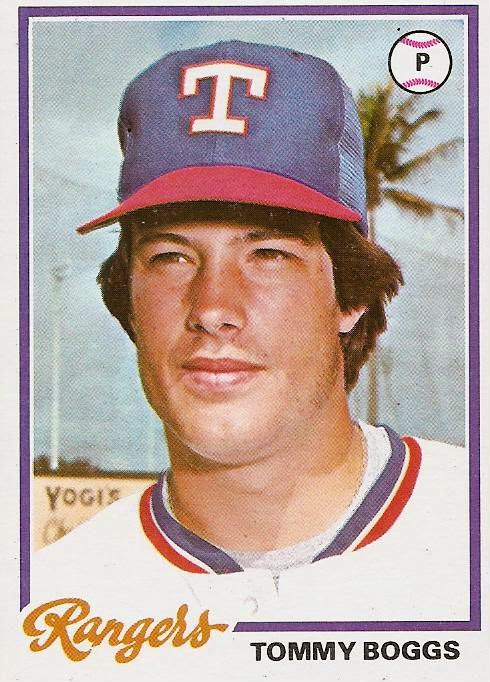 1977 had been an ugly season for Tommy Boggs, shown here on card 518 of the 1978 Topps set. The former first round draft pick struggled at both Triple A and during a brief stint in the Majors. After two brief stints with Texas in 1976 and 1977 Boggs still had a lot of work to do if he was going to stick in the Big Leagues.

That work wouldn't happen with Texas. On December 8, 1977 Boggs became part of the biggest trade of the season. Tommy joined Bert Blyleven, Adrian Devine, Eddie Miller, Tom Grieve, and Ken Henderson on the outbound half of the trade.

Landing in Atlanta, Boggs would spend most of the rest of his career in the Braves organization. He would return for a cameo with the Rangers in 1985 to finish things up but his shot at a regular spot on the Rangers roster was long past by that point.
Posted by Spiff at 10:10 AM

Tommy Boggs, the pride of Lanier High School in Austin, TX. He's by far the most famous person from that school which now days struggles to even field a baseball team.